About the castle Nové Hrady

Brief history of the castle 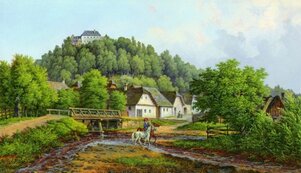 The Castle of Nové Hrady (trans. New Castles) was in all likelihood built in the first half of 13th century on the point above the little river “Stropnice” and “Novohradský potok” stream nearby an important Vitoraz trade route from Austria to Bohemia. It is also probable that the Castle was from the beginning designed as a “pass-through castle” with two gateways. The dominant feature of the castle used to be the round tower (Bergfried or The Keep) situated inside the courtyard, which dissolved after a gunpowder explosion in 1573 as well as the oldest palace on the east side did. Among the oldest parts which have come down to present days you can see the peripheral fencing and the tower above the west gateway.

In late Gothic time the new fencing was built strengthened with several bastions built in it in order to protect the defenders as well as to make the flanking fire possible from the side loopholes – a new defensive element at that time. The fortification ward made the defence stronger and enabled the soldiers to move continuously. The new Renaissance palace in the west face of the castle was also built and the windows of the palace are one of the very first tokens of Renaissance in South Bohemia. Other buildings to emerge in the 16th century were the new tower above the north gate and the suzerain's brewery. A rebuilding by turn of the 17th century followed the mentioned gunpowder explosion that besides the tower damaged many other buildings of the castle. The castle was completely rebuilt and embattled with a mighty moat.

When in the first half of the 17th century the castle ceased to serve as a residence of suzerains (because it had ceased to meet the comfort standard request) other little reconstruction were undertaken to accommodate the building to the new usage – flats for clerks and farmsteading. The flats in the castle remained together with a little exhibition (opened in 1950s) until 1980s when a large reconstruction started.

Nové Hrady was first recorded in 1279 in a predicate of Ojíř from ancient Vítek family. At the beginning of the 14th century the estate devolved to the House of Landštejn who sold it to Rožmberks in 1358. Rožmberks did not use the castle to reside there, perhaps they use it from time to time as a provisional shelter. However Nové Hrady served as an important administrative centre of the Nové Hrady domain. In the time of Oldřich II of Rožmberk, one of the most powerful enemies of Hussites, the domain was driven into the withering Hussite Wars. Nové Hrady was first attacked unsuccessfully in 1423, and then in 1425 Hussites captured the castle and the town and burnt them both down. Rožmberks renewed the castle quickly, though, and provided new garrison. It was besieged and seized once more in 1467 by the army of Zdeněk of Šternberk. In 1476-1486 Rožmberks gave the castle in pledge to House of Grafeneck. The castle started to flourish again in the time of the last Rožmberks.

When the last member of the family of Rožmberk Petr Vok died in 1611 the inheritance agreements gave the castle to the property of Švamberks. The new owners took part in the following upraising against the King and Emperor and so the castle was besieged again, first in March 1619 the imperial general Dampierre tried it without success. The second attack began in June under the leadership of Charles Bonaventura Buquoy and the garrison of the castle gave up.

Buquoy was compensated for the war expanses by obtaining estates in South Bohemia from Emperor Ferdinand II, among them Nové Hrady, Rožmberk, and Libějovice. However, he died the following year during the siege of Nové Zámky. His wife Maria Magdalena neé Biglia governed the estate then for her underage son Charles Albert. In 1635 she moved to the Residence in the town square and since then the castle exchanged the role of residence for a mere administrative centre. Buquoys, however, kept the castle till 1945 when it was nationalized and now belongs to state property.